These short-term loans are not as costly as a payday loan and are just as easy to get.

How Much Cash Do You Need?

Thank you! Your submission has been received!
Oops! Something went wrong while submitting the form.
Advertiser Disclosure

What is a Title Loan?

A title loan is a type of small-dollar-credit (SDC), short-term loan secured by an applicant putting up the title of a given asset as collateral. The most common form a title loan takes is that of a car title loan, or auto title loan, wherein an applicant leverages the title of a car or vehicle in acquiring the loan. As part of the loan agreement, a lien is placed on the vehicle in question by the lender and is only removed in the event of the loan being fully repaid. By their nature, title loans require that the title of the asset in question has no pre-existing liens and that the asset is fully owned by the applicant.

In general, title loans are short-term, and like their short-term cousin payday loans, have higher interests rates than traditional loans. Also like payday loans, they tend to offer small amounts only. Title loan lenders typically do not check credit scores, and may not even check for steady income from applicants, given that the loans are secured. Title loans thus suffer from many of the same drawbacks afflicting most SDC loans in that they’re APRs are inordinately high, and they are designed to be repaid in lump sum “balloon payments,” which in turn results in a higher-than-normal default rate and in borrowers being trapped within a never-ending cycle of debt. This state of affairs has led to title loans being banned in 25 states, state governments being especially quick to legislate irresponsible and predatory lending practices following the 2008 financial crisis.

That being said, title loans, like all short-term SDC loans, can arguably be a good option for individuals with poor credit in need of quick cash, such as in the case of an emergency. Many people don’t have the credit or banking infrastructure required to access loan funds through traditional means, and SDC lending has stepped in to fill this service gap in the market. In theory, this type of lending doesn’t have to be exploitative and predatory, but, as often is the case, it frequently is, and therefore we urge potential title loan applicants to be especially cautious when proceeding with a title loan by reading agreements carefully and by exploring alternative funding options first.

At Online Loans we’re looking to make worthwhile financing a reality for those in need, and to that  have broken down the sea of information available about title loans into a digestible need-to-know format for your benefit.

Rates differ state-to-state, especially lately as state legislators have begun placing caps on APRs for title loans, but average out at around 300% APR (for state-specific information, please consult our by-state title loan index below). Loan amounts are determined by the potential resale value of the asset being put up as collateral. In the case of auto title loans, vehicles are typically appraised using the Kelley Blue book, and in most cases, the loan offered will be between 30% and 50% of the vehicle’s value. Leaving some of the vehicle’s value untouched offers lenders a cushion to cover the expenses inherent in repossession and resale in the event of a default, fees which are unfortunately in most cases passed on to the borrower. Any remaining funds after repossession and resale are typically returned to a borrower, although this also varies state by state.

Title loans, as mentioned above, have a potential to be exploitative. It’s worth noting here a few unpleasant facts about the industry that, together, build a picture of the inherent risk in taking out a title loan. First, 1 in 5 title loans ends in default, roughly 20%, a figure that completely eclipses rates for more traditional loans (below 5% on average). Second, over 80% of title loans are the result of refinancing. In short, this means that more than 80% of the title loans actuated in the US are simply old, defaulted title loans re-packaged into new loans, keeping borrower in an impoverishing cycle of debt. This figure is so high that one can only infer that the title loan industry requires cyclical debt to survive.

Where is a Title Loan Legal?

As mentioned above, title loans are not legal in every state. In fact, due to fears about the spread of unregulated, predatory lending, over half of US states have made title lending illegal. The states listed below all allow for title lending. For state-specific information relating to rates, regulations, and the like, please click the state in question to be redirected to that state’s respective title lending page.

Title loans and payday loans share many commonalities. They are both short-term, SDC loans designed to appeal to a demographic of potential applicants with bad credit, limited time, and limited options, in that they require no credit check and can be granted in less than a day. They both can, hypothetically, be a good option for individuals in need of emergency funds who don’t have access to the banking infrastructure more well-to-do citizens enjoy, but they both suffer from a surfeit of predatory lenders who take advantage of this vulnerable demographic, and have thus both been subject to much state and federal regulation, and are not therefore available in every state.

Where title loans and payday loans differ is in the more granular, numeric details revolving around the specifics of their disparate loan structures. Title loans tend to be a bit more across the board, with larger average loan sizes (up to $10,000 vs. up to $1,000) and longer average repayment periods (30 days to a few months vs. two weeks to a month). Also, obviously, the stakes are higher with title loans, in that the titled asset is liable to be seized in the event of a default.

How to Get a Title Loan

Taking out a title loan is an incredibly simple and fluid process, and becomes more so every day as tech-based startups innovate methods by which title loans can be dispersed using the internet and mobile applications. The process is essentially as follows: An applicant, knowing they need money fast and have no alternatives at their disposal, but that they fully own something of significant value, such as a car, seeks the services of a title loan lender either in person or through the internet.

To properly process the loan, the chosen lender will require proper identification from the applicant, such as a driver’s license, as well as some cursory documentation, such as proof of income, proof of residency, the registration of the car in question, the car’s lien-free car title (in the applicant’s name), references, and proof of car insurance. Not every state requires proof on insurance to process a title loan.

The loan amount is then determined by the perceived value of the asset whose title is being offered as collateral. For a car, the typical maximum loan amount is half of the vehicle’s worth, a value usually determined by consulting a Kelley Blue Book. Interest rates will vary by the perceived risk of the loan, but they tend to average around 300% APR. Payment schedules typically are structured such that interest is due each due date, the full amount of the loan only needing to be paid back at the very end of the loan term – what’s known as a “balloon payment.” Once the loan is solidified, the lender may require the installation of a GPS tracker or a remote immobilizer to further secure the asset in the case of default.

In the event that, come time to repay in full, the applicant cannot, two things could happen. The first and most common solution is to refinance the title loan with a new title loan with the pre-existing balance rolled over. This is common because it is how lenders trap applicants in cycles of debt, which is where the highest potential for profit in the title loan industry lies. In some states, there is a limit as to how many times a title loan can be rolled over.

The second option, which is also painful for the debtor, is for the lender to repossess the asset being used as collateral, and sell it off to repay the outstanding loan. This is rarely done, and not just because of the potential to become ensnared in a second loan. Repossessing and re-selling a vehicle can take months and is an expensive process.

Title loans have a bad reputation, and indeed can be dangerous if you’re not careful how you use them. But in a jam they can be just the thing you need to get back on track financially. If you’re careful what you agree to, and sure you can afford to pay your loan back on time, they may be the right option for you. 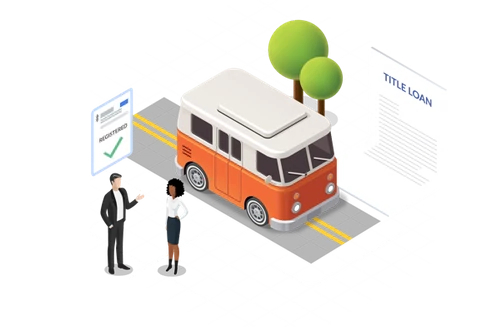